Ciguatoxins are a group of toxins that are present in certain fish and are responsible for a type of severe food poisoning called ciguatera. The consumption of tropical and subtropical fin fishes contaminated by ciguatoxins can cause several painful neurological, gastrointestinal, and cardiovascular symptoms. Ciguatoxins are known to be powerful voltage-gated sodium channel activator toxins, which partially explains some of the sensory symptoms associated with ciguatera. However, for many of the neurological symptoms caused by ciguatoxins, the underlying biological mechanisms remain poorly understood. It has been recently shown that ciguatoxins are extremely effective at releasing calcitonin-gene related peptide (CGRP) from nerve terminals. (1). Here, we use the CGRP ELISA kit to evaluate the release of CGRP in mouse and rat skin preparations induced by Pacific Ciguatoxin-1 (P-CTX-1).

Skin preparations: The skin flaps of the lower hindpaws of young male Wistar rats (70–80 g; n = 39) and male C57BL/6J mice (15–35 g; n = 136) were used for the release experiments. The preparation of the skin started at knee level and excluded the toes and it spared larger vessels, and saphenous and peroneal nerve stems. The obtained murine skin flaps had an average weight of 0.10 g while the average weight of rat skin flaps was 0.28 g. They were wrapped around acrylic glass rods with the corium side exposed to the surrounding solution and were fixed with surgical silk threads. The mounted skin flaps were then washed for 30 min in carbogen-gassed synthetic interstitial fluid (SIF, pH 7.4) whose composition is described in (1).
Stimulation procedures: After the initial 30 min wash-out in SIF, the skin flaps were placed for 5 min each into pre-warmed glass tubes mounted in a shaking bath at 32 °C. One day prior to the experiments, the tubes were treated with Sigmacote© (Sigma-Aldrich, Taufkirchen, Germany) to prevent adhesion of CGRP and P-CTX-1 to the glass surface. Sigmacote® was refreshed after each 10 experiments. All tubes were filled with 0.7 mL of SIF or stimulation solution containing various concentrations of P-CTX-1 or drugs
ELISA assays: iCGRP (immunoreactive calcitonin gene-related peptide) content in the eluates was measured using the CGRP rat ELISA kit (A05482, Bertin Bioreagent, France) as described in (2,3). Briefly, the samples were mixed with 5-fold concentrated commercial CGRP enzyme immunoassay buffer (200 µL sample + 50 µL buffer. The enzyme immunoassays were run on 96 well plates, which were photometrically determined using a microplate reader (Dynatech, Channel Islands, UK). The minimum detection limit observed was 5 pg/mL. The intra and inter-assay coefficients of variation with repeated measurements were 10–15%. Results can be seen in Figure 1. 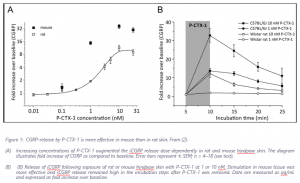 Once connected, you will access a database of 2000+ scientific references.